Unlike external load banks which require a completely separate footprint and waste their heat to the surrounding environment, ECO-HEAT is designed to be installed in the exhaust pipe and provides heat directly where it is needed within the aftertreatment system. Using electricity from the generator, it has the dual effect of increasing exhaust gas temperatures by both increasing load on the diesel engine and heating the exhaust directly. This saves valuable space and requires less energy, resulting in less fuel consumption. If generator load demand increases, the ECO-HEAT system gradually reduces its load and thermal output, and shuts off as soon as exhaust gas temperatures reach acceptable levels.

“Low exhaust gas temperatures resulting from low load or low ambient conditions can compromise the performance of your diesel generator’s aftertreatment system,” said Jeff Diestelmeier, director of global marketing, diesel emissions business unit. “These problems can lead to unplanned downtime and expensive repairs. You can think of ECO-HEAT as a smart internal load bank to help ensure that your diesel generator stays running when you need it.” 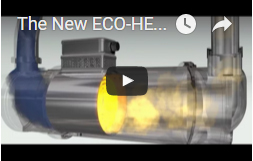